Labor, Unions and Workers know they have been swindled, their pensions jeopardized, and a lifetime’s work placed at risk.

The last time American workers were faced with fixing their financial system, American Labor called for a fair and honest monetary system, enjoyed broad public support, and worked to achieve it. The ensuing prosperity lasted more than a hundred years. It provided average Americans and millions of immigrants with better jobs, rising wages, and better lives for generations to come. 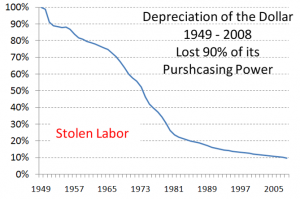 “Depreciation of the dollar 1949 – 2008; Source: Federal Reserve CPI data.”
Labor’s Heritage Supports Honest Monetary Weights and Measures, and In the last century, Labor was very concerned about the inequity of fiat money and Legal Tender Laws (these terms have been lost from the vocabulary but the absence is what we now associate with our dishonest and unfair financial and monetary system). When the U.S. Labor Movement began circa 1830, three issues motivated workers to form unions:

In 1832 Andrew Jackson ran for President as a Populist Democrat. He made hard money and the discontinuation of the Bank of the United States his principal campaign issues. His rallying cry was “Gold is the friend of the farmer” (and the worker). The perils of paper money were well understood. Today, that knowledge has been lost.

“… Of all the contrivances for cheating the laboring classes of mankind, none has been more effective than that which deludes them with paper money.”
Daniel Webster as quoted in Fiat Money Inflation in France by Andrew Dickson White.]

In 1832, Americans were wary of banks and of paper money. The experiences of the Revolution were still current, and memories of the loss of savings and the hardships wrought by the devaluation of the paper money of the time, called continentals, were still present. A well-known derogatory saying was “not worth a continental,” i.e., not worth anything.

Accordingly, the Framers had written safeguards against paper money into the Constitution. In Article I Section 8, Congress was given the power to coin money; and in Article I Section 10, the States were mandated to only use gold and silver coin when making a payment of debt. The Framers were clear on not giving the government the power to “emit” bills, i.e., issue paper-ticket money. The authors of our US Constitution – almost all of them – had been financially ruined by it (a dishonest monetary system).

In 1832, Ely Moore was elected as president of the Typographers’ Union, one of the first unions in the U.S. He was also the first union official elected to the Congress, which was in 1834. Hard money was a principal issue for him. Along with most others at the time, he knew about the catastrophe caused by the destruction of France’s fiat money, called assignats at the end of the Eighteenth Century. He was also a staunch supporter of Andrew Jackson.

We suggest reading one of the better explanations you can find anywhere. It was relevant then and more so now (particularly if you know anyone living in France or Europe). See:

“Fiat Money Inflation in France, How It Came, What It Brought, and How It Ended“
Andrew Dickson White, LL.D., Ph.D., D.C.L.

During the Civil War, President Lincoln issued irredeemable paper dollars called Greenbacks. After the War, there was much controversy about whether to resume hard money. There was dissension among labor, banking and business. The only group that was steadfast for honest monetary weights and measures were the churches. [You can read more about how the churches led the return to an honest financial and monetary system here]

The Churches maintained that issuing paper money was not in conformity with the Eighth Commandment [“Thou Shall Not Steal”] and that it violated God’s admonitions not to tamper with weights and measures. It was the moral authority of the churches that compelled President Grant to sign the Resumption Legislation (to resume gold-as-money) in 1874.

In 1888, in his Annual Message to Congress, President Grover Cleveland spoke of the danger of unsound money to workers. He said:

“At times like the present, when the evils of unsound finance threaten us, the speculator may anticipate a harvest gathered from the misfortune of others, the capitalist may protect himself by hoarding or may even find profit in the fluctuation of values; but the wage earner–the first to be injured by a depreciated currency and the last to receive the benefit of its correction–is practically defenseless.“ (Emphasis added)

By the end of the Nineteenth Century, unions reaffirmed their commitment to honest monetary weights and measures. For example, the January 1896 issue of the American Federationist, the house organ of the American Federation of Labor, ran articles in which the following claims were made: [Note: As a matter of course, nothing appears in a union paper that does not have the approval of the leadership.]

“Gold is the standard of all great civilizations.”

“We [the American Federation of Labor] believe in a financial policy that will neither depreciate our currency at home nor abroad.”

“We believe in an honest dollar.”

And in the September 1895 American Federationist, Stephen T. Byington assailed the money monopoly:

“No legal tender law is ever needed to make men take good money; its only use is to make them take bad money. Kick it out!”

With our fraudulent fiat money system, workers are at risk that when they attempt to exchange their savings and pensions for stuff, e.g., food, medical care, etc., the purchasing power of their dollars will have melted away. Fiat money’s complete loss of purchasing power is the history of the world since the Eighth Century in China. There have been no exceptions. Why anyone believes that our central bankers and politicians have more integrity than officialdom of the past and can prevent the collapse of the dollar is a mystery.

The monetary system we have now is inherently unfair to Labor. A typical manifestation of this was the headline in the New York Times on 10/29/99 on page C1 (the Business Section). It read: “Economy Expands Briskly, With Labor Costs Benign.” Another, and more accurate, way of saying this is: “Economy Expands Briskly, Labor Does Not Get Its Share.”

Imagine that somehow you were able to create legal tender money (“dollars”) out of nothing and with no work. Can you conceive of how much power that would give you?

For openers, you would have the ability to buy off politicians with unlimited “campaign contributions,” thereby corrupting the political process.

You could then enlist the coercive powers of government to consolidate your advantage over ordinary people and to further your ends.

Think of how you would be able to enhance your own life and those of your friends and colleagues by, in effect, redistributing the real wealth of society from those who earned it to yourself and other favored parties.

Depending upon how greedy you were, you could expropriate almost all of the wealth leaving those who produced it in abject poverty.

This is the situation that maintains today. A small group of private corporations, both at home and abroad, has acquired the power to create legal tender money out of nothing.

These corporations are called banks.

Suppose the banking system were to propose legislation to allow itself:

Would Labor allow this legislation to go forward? If not, why permit the banking system to keep these privileges?

Mindful of how all of this works to Labor’s disadvantage, why is Labor allowing the banking system to maintain—and with the imminent repeal of Glass-Steagall—enhance these privileges?

Suggested Reading: How our Fiat Funny Money Monetary System has Caused Unions to Lose Power and How to Regain It

“Madison, agreeing with the journal of the convention, records that the grant of power to emit bills of credit was refused by a majority of more than four to one. The evidence is perfect; no power to emit paper money was granted to the legislature of the United States.”++

Most Christians, Jews, Catholics, and Muslims know that … END_OF_DOCUMENT_TOKEN_TO_BE_REPLACED