The meaning of free trade is that trading partners should be able to trade lawful goods and services in fully informed voluntary transactions without hindrance or subsidy.

When Adam Smith in his seminal The Wealth of Nations circa 1776 and classical economist David Ricardo in his On the Principles of Political Economy and Taxation circa 1817 posited the benefits of comparative advantage and free trade, the understanding was that “exports will pay for imports”: that one was trading value for value, i.e., work for work. [Emphasis added] What could be unfair about that?

The overriding benefit of free trade is that it facilitates the division of labor and improves the standard of living of all concerned.

How is it that the principles put forth by Smith and Ricardo, which appear to be timeless and made perfect sense for nearly 200 years, are now thought to be decimating U.S. manufacturing and other industries?

Free-trade and fake, a.k.a. “fiat”, money are incompatible:

When Smith and Ricardo were advocating for free trade, the world’s monetary system was based on gold and silver coin, not legal tender irredeemable paper-ticket-electronic “money,” the kind of money we have now.

Two plots below show the resulting trade deficits and cumulative trade deficit after gold was completely removed from the U.S. monetary system in 1971. At that time the U.S. substituted a phony monetary system. We no longer have free trade as contemplated by Adam Smith and David Ricardo, because we are not trading work-for-work or value-for-value.  How much more work does it take to print a $100 bill as compared to a $1 bill?

As more fully explained below, because our monetary system is prima facie phony, it is a misrepresentation to call the current incarnation of globalization free trade.

It contradicts Ricardo’s dictum that “exports will pay for imports.” Sending electronic blips or legal tender irredeemable paper-ticket “money” abroad are not exports. They are not real money, because real money has no counterparty risk and does not need to be legal tender.

They are not even promises to pay money. They are merely monetary tokens that a recipient may, but not necessarily, be able to exchange for goods and services later. They are vulnerable to a complete loss of purchasing power.

The transfer of what are now called “dollars,” either as numbers printed on a piece of paper or an electronic blip from a computer, do not complete the trade until they are exchanged for tangible items, intellectual property or services.

Some claim that our now fake money sent abroad comes back to the U.S. to be invested in U.S. Government bonds and securities denominated in dollars. So what? That, again, does not constitute trade. But what about when foreigners purchase, dismantle and ship entire factories back home? Something is generally wrong with this transaction genre.

No one in their right mind would trade capital goods for consumer goods. The analogy is a workman trading his tools for Nike running shoes. Where would he be without his tools when the running shoes wear out? More importantly, one loses the skill sets and knowledge about operating and improving those tools.

Millions of good-paying manufacturing jobs have been lost. The skill sets associated with those jobs have also been lost. In addition to the unfathomable hardship on the affected workers, their families and their communities, in many cases there are national security issues at stake.

Prior to August 1971, so-called “dollars” sent to foreigners in exchange for their goods and services were, by a United States Senate ratified treaty, the Bretton Woods Agreement, promised redeemability for gold at the rate of $35 for an ounce of gold.

Here is the progression of how the promises defaulted: 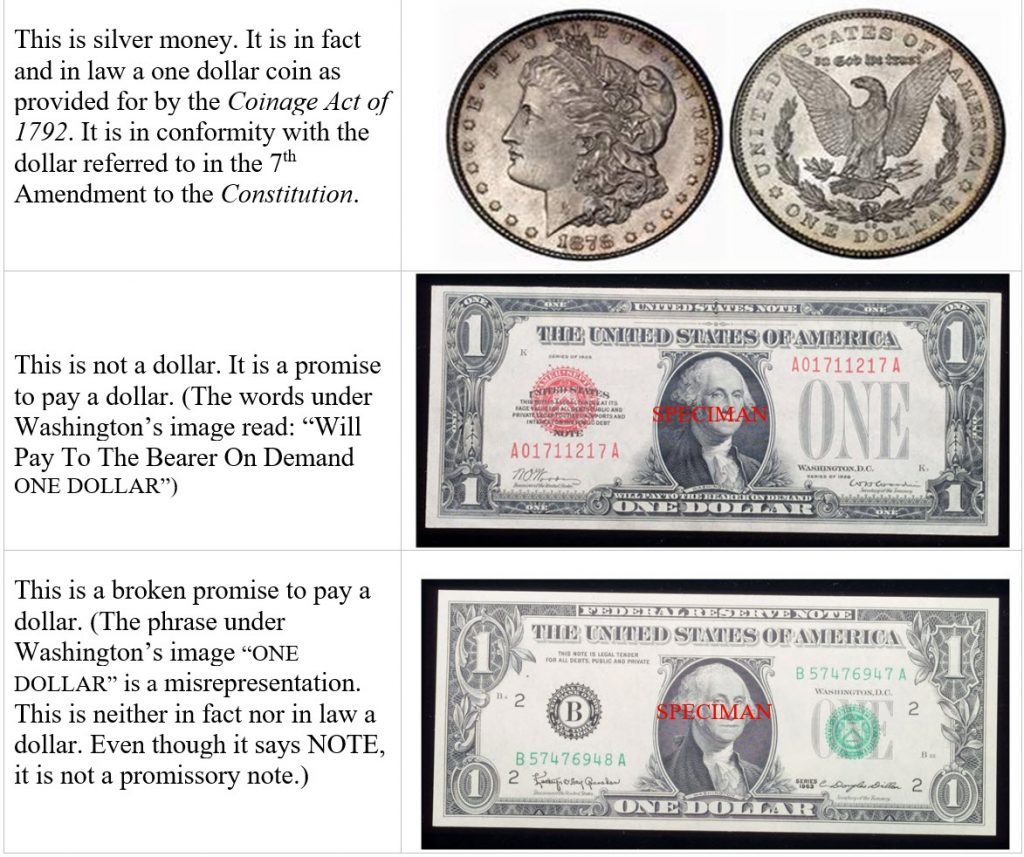 What we are now “paying” for our imports are not in conformity with free-trade principles.

Moreover, broken promises to pay money cannot retain purchasing power. The history of legal tender irredeemable paper-ticket-electronic money is that its purchasing power always approaches the cost of producing paper money: near zero. For electronic blips it is zero!

Foreigners who exported to the U.S. tangible items, intellectual property and services will end up with an empty bag. Some suggest that U.S. consumers have benefited from paying less for foreign-originated goods and services. In addition, cheaper goods from overseas reduced pricing power for domestic producers, thereby benefiting consumers even more. In the near term, this is true.

U.S. consumers have been inadvertent parties to transactions that will be seen to have cheated foreigners. This would not be the first time. In 1933, when President Roosevelt changed the redemption amount from $20.67 to $35.00 for an ounce of gold, foreigners holding U.S. dollars, or who had contracts providing for future payment of dollars, were cheated.

Importantly, by allowing this system to continue, U.S. consumers will pay a very high price: savers, annuitants, pensioners and all those promised future payment in dollars will be wiped out.

For myriad reasons, this must be fixed. Domestic manufacturers have been the early victims of this system. They are not mindful of how our monetary system has been transformed. There is not a university in the country that teaches anything about this. Almost all the key concepts have been removed from textbooks. As the empirical evidence demonstrates, not beyond a reasonable doubt, but beyond doubt, quotas, tariffs, anti-dumping regulations, lawsuits and the like have not, and will not, do the job.

This is not a matter of monetary policy, as the National Association of Manufacturers found out about fourteen years ago when Paul O’Neill was our Secretary of the Treasury.  At that time, the NAM sponsored The Sound Dollar Committee. Its only remit was to convince Treasury to coerce foreign nations to stop alleged currency manipulation.

It was, and remains, beyond Treasury’s ability to do that. The fact of the matter is that our current monetary system is unstable, unauthorized (by the Constitution), and dishonest. There is nothing manufacturers or Labor can to do that will deliver relief within this system.

At the end of the day, it is a governance issue: who is in charge: the people, as provided for by the Constitution, or a specially privileged banking cartel?

The cumulative trade deficit today, about $11.5 trillion [no typo], would not have been possible if we had an honest monetary system, one that is in compliance with the Constitution. Imagine what would have been, and would be, the employment level, standard of living, pension funding levels, etc. if we had produced an additional $11.5 trillion worth of goods and services over the period. It would be a different world.

A tipoff that international trade is not being properly conducted is that the number range “trillions” is reserved for astronomy, not finance.

Ironically, the NAM was on the right track with its call to rid the world of currency manipulation. Former Chairman of the Board of Governors of the Federal Reserve Paul Volcker supplied the solution. He declared:

A global currency will level the playing field. All trade participants will be trading with the same deck of cards. A monetary system that is stable, honest, and, at least for the U.S., in conformity with the Constitution, will provide the basis for expanding free trade as never before.

The decision makers should be those who use the monetary system for transferring wealth over space and time: (1) those engaged in productive enterprise generally, i.e., producers of goods and nonfinancial services including especially large multi-national corporations; (2) savers, annuitants, pensioners; (3) small countries; (4) Organized Labor, etc.

Those whose primary role is performing financial transactions, i.e., financial sector participants along with their “experts,” should not participate, because they have an unacceptable conflict of interests with producers, Labor and almost everyone else.

The financial sector produces no final product. It is only a facilitator of financial transactions that are necessary for the production and distribution of goods and services and for transferring wealth over time.

Up until now, the structure of the world’s monetary system has been left to the financial sector. It is understandable, but not acceptable, that financial sector participants have rigged that structure for their own benefit and to the detriment of everyone else.

The conflict is that producers of goods and services, savers, pensioners, Labor, and ordinary people everywhere seek a monetary system that is stable and honest. The financial sector does not want a stable system. Because it pulls so much profit out of the system from trading, it seeks volatility. Further, as the empirical evidence confirms, provided financial sector participants stay within the bounds of legislation, honesty is a non-issue.

Importantly, when it comes to financial legislation, the financial sector has coopted U.S. lawmakers. For example, as U.S. Senator Dick Durbin, 30+ years in the Senate and former Senate Minority Whip, in a candid moment confessed: “The banks own the Congress.” I have the clip, and it is quoted in Act of Congress: How America’s Essential Institution Works, and How It Doesn’t by Robert Kaiser, former managing editor of the Washington Post.

After the criteria and recommendations for reforming the monetary system have been determined, those with a stake in the system shall lobby their governments to implement the system. No doubt at this time financial sector participants will weigh in, but by then all relevant considerations will be on the table for all to see. Hopefully politicians will cease allowing financial sector participants special privileges/subsidies and uphold and defend the Constitution, as they are all sworn to do.

This is not a call for a return to the so-called gold standard, which this author advocates against (see: Six Reasons Why Promoting the Gold Standard is a Mistake). The answer at least in the U.S. is to reform our monetary structure to be in conformity with the Constitution, i.e., the rule of law, something Republicans claim to be in sympathy with.

At the same time, Democrats, who claim to be in sympathy with the inequities that have been inflicted upon workers, should also implement reforming our monetary system.

After a stable and honest monetary system is adopted, real free trade along with all its concomitant benefits will be universally embraced.

Further information about a possible legislative monetary remedy can be found here:

Larry Parks is the Executive Director of The Foundation for the Advancement of Monetary Education and the author of What Does Mr. Greenspan Really Think?

Most Christians, Jews, Catholics, and Muslims know that … END_OF_DOCUMENT_TOKEN_TO_BE_REPLACED