You are here: Home / Articles / The Most Important Worker Right: The Right to be Paid with Real Money

In 1955 a hit song with the unlikely title “16 Tons” became the then second largest selling record of all time, having sold about 20 million copies, according to Doris Day.[i] To this day, there is hardly anyone who was born before 1945, and many even thereafter, who doesn’t recall Tennessee Ernie Ford’s soulful rendition.

What was it about “16 Tons” that resonated so powerfully across almost every demographic?  You couldn’t dance to it. It was not as if it was recorded by a very famous artist, e.g., Frank Sinatra or Bing Crosby. The melody was not sophisticated.

The answer is that the lyrics reverberated with almost the entire population, and especially coal miners. Here is the refrain:

“You load sixteen tons, what do you get?

Another day older and deeper in debt

I owe my soul to the company store”

Why would anyone sign up for a dirty, dangerous, unhealthy and back-breaking job mining coal, in those days with a pick and shovel, and at the end of the day owe more money than when the day started? On the face of it, one would need to be a fool.

Part of the answer is that workers were induced to coal mining because wages appeared high. They did not understand prior to beginning work that everything they purchased would have to be bought from the “company store” at inflated prices. 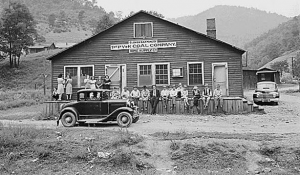 It was common in coal mining locales, which were geographically distant from nearby towns, for mining companies to own the store that sold to their employees all of their everyday needs. To keep miners working and to coerce them to stay on, mining companies would selectively raise prices so that the miners were in perpetual debt.[ii] “16 Tons” dramatized this injustice to music.

In addition, it was common practice for the companies to employ armed guards to ensure that the miners did not run off without paying their debts. The miners were de facto “debt slaves.”

Significantly, there was another and much more insidious tactic that mining companies used to keep workers in debt bondage. The companies did not pay workers with real money. They paid them with company scrip that was redeemable only at the company store.

Here is an example of company scrip:

Figure 2: 50¢ Scrip issued by The Canaan Coal Company. Notice the legend at the top “This is not intended as a circulating medium,” and underneath “in merchandise upon presentation at its store.”

Thus, a miner could not save up his wages and move, say, to Chicago. He was effectively trapped by the company.

Before I continue with the story, except for the issuing authority, what’s the difference between company scrip and the legal tender irredeemable paper-ticket-electronic make-believe money that workers are paid with today? 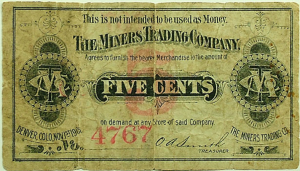 What remedy did coal miners have to escape debt bondage? They organized.

In 1890 they formed the United Mine Workers of America (the “UMW”). The founding UMW Constitution provided in the 2nd Item of the preamble the purpose of their collective action:

“To establish as speedily as possible, and forever, our right to receive pay, for labor performed, in lawful money and to rid ourselves of the iniquitous system of spending our money wherever our employers see fit to designate.”[iii] [Emphasis added.]

“To secure, by legislation, weekly payments in lawful money.” [iv]

The Federal Reserve Legislation, enacted at the end of 1913, specifically provided:

“They [Federal Reserve Notes (“FRNs”)] shall be redeemed in lawful money on demand at the Treasury Department of the United States, in the city of Washington, District of Columbia, or at any Federal Reserve bank.”[v] [Emphasis added.]

Thus, FRNs could not have been lawful money. It was neither the intention of Congress nor would the public have accepted FRNs as lawful money.

In 1890 when the UMW was formed, lawful money was gold and silver coin. It wasn’t until 1933, when a run on the U.S. banking system revealed that the system of issuing FRNs greatly in excess of the gold to which bearers were entitled to redeem them in gold could not be met.

President Roosevelt did not explain that promises to redeem FRNs for gold and silver coin were empty, a.k.a., fraudulent, promises. They misrepresented the capability of being honored.  Savers, those who were promised future payment in gold, e.g., pensioners, annuitants, holders of United States Liberty Bonds that were sold to help finance WWI and had a gold clause, and many others were cheated.

To obfuscate that ordinary people had been defrauded and that the entire banking system was de facto bankrupt and could not fulfill its obligations to FRN holders, President Roosevelt confiscated monetary gold in the hands of the public and made it a felony for Americans to own monetary gold worldwide. At the time, labor was on its knees and did not object.

While the felony penalty for owning monetary gold was lifted at the end of 1974 by President Ford, all of our money remains just ink on paper.

What is the relevance of this today? What does it matter if workers are paid with legal tender irredeemable paper-ticket-electronic make-believe money (FAKE MONEY) or real money, i.e. gold and silver coin?

For day-to-day purchases, it makes no difference. Whatever medium one gets paid with is immediately spent on goods and services, so why should it matter if it’s not real money?

It does matter greatly for future payment, e.g., pensions. Today, there is virtually no real money in workers’ pension plans. It’s all just ink on paper or blips (FAKE MONEY) in a computer vulnerable to “monetary policy” which is driven by the banking system, a cartel of private companies.

If workers want a secure retirement they need to relearn the hard-won lesson from the UMW and insist that their pensions, annuities, savings, etc. be denominated in real money. That would be gold and silver coin, as provided for in Article I Section 10 of the United States Constitution.

Larry Parks is the Executive Director of the Foundation for the Advancement of Monetary Education, and the author of What Does Mr. Greenspan Really Think?

[iii] Constitution and Laws of the United Mine Workers; Established January 24th, 1890; Preamble

“Whoever controls the volume of money in any country is absolute master of all industry and commerce.”++

Most Christians, Jews, Catholics, and Muslims know that … END_OF_DOCUMENT_TOKEN_TO_BE_REPLACED